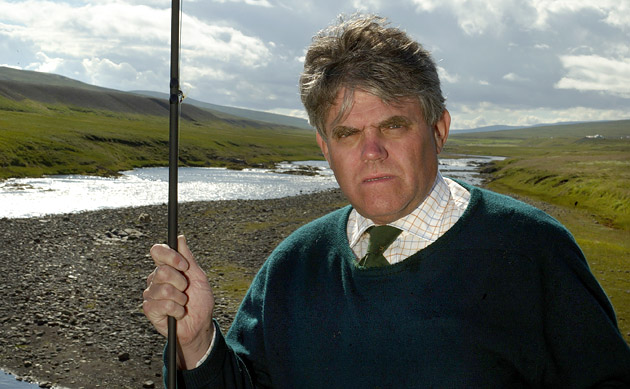 Campaign to control salmon netting in the Northeast Atlantic
Nets in northern Norway operated through licences granted by the Norwegian Government target mixed stocks of Atlantic salmon and constitute the most serious, and certainly the most egregious, remaining threat to the wild Atlantic salmon. Most of the spring salmon they intercept are of Russian origin and thus are subject to limits imposed by the Law of the Sea Treaty (Norway and Russia are both signatories). Enforcing these limits has been a long and mostly fruitless struggle, but there are hopeful signs the Norwegian Government may finally be yielding to the international pressure NASF, working with Russia and other countries, has been applying for years. Following a series of meetings in Norway, their Government is expected in early 2016 to issue new regulations to apply around their coastline in the 2016-19 period.

Greenland
NASF has worked ceaselessly since its founding in 1989  to limit kills of wild Atlantic salmon in Greenland waters. The commercial agreements we initiated have saved millions of wild salmon, but have now lapsed. Thus we are actively working with the US State Department and NOAA to expand their activities on the west coast of Greenland, the feeding grounds for most North American salmon. We participated in a high level meeting with these agencies in Washington DC last year (along with representatives of ASF) and are now trying to persuade these agencies to take meaningful steps to save the few remaining US salmon before it is too late. The US authorities have agreed to work with the NASF/ASF partnership outside their normal inter-governmental projects. Currently there are ongoing discussions to draft a memorandum of understanding with Greenland authorities and KNAPK, the Association of Greenland Hunters and Fishermen. The meetings will take place in Nuuk, the capital of Greenland. We have offered to reactivate our Greenland Salmon Fund and we have identified various projects, such as sea weed harvesting (for diet food and medicine products), land based salmon farming, research on improving native salmon stocks and tourism related activities, including sport fishing, that would provide Greenland natives with alternative means of earning a livelihood.

Faroe Islands
The high seas moratorium around Faroe Islands continues and is now in its 25th year. See press releases of February 2015.

Scotland
Scorland is an international focal point for management of salmon fisheries since salmon and salmon angling remains such an important part of Scottish culture and tourism and Scotland has so many storied and still reasonably productive salmon rivers. NASF and its affiliated organizations in Scotland have been active in Scotland for many years. Last year the Scottish First Minister, Alex Salmond, set up a review group to propose changes in the Scottish management of their fisheries – a very welcome initiative. NASF presented the chairman of this group, Mr Andrew Thin, with recommended management policies and has exchanged letters with the minister in charge of salmon issues. In September the Minister of Environment, Dr. Eileen McLeod, invited NASF and longliners from the Faroe Islands to a high level meeting in Edinburgh with her and her new team of salmon advisors. A three year plan to stop netting has been proposed as a start to restore salmon stocks with NASF to be advising Scotland on efforts to accelerate recovery of stocks which includes review of land-based fish farms.

Campaign for sustainable salmon farming
NASF has hosted a number of seminars to highlight the problems caused by open-sea salmon cages and featuring presentations by experts in land-based fish farming to introduce people in this industry to the benefits and economic practicality of this method.  These seminars are ongoing, including a special campaign with the Norwegian Salmon Rivers Association directed at the huge fish farming operators in Norway. There is a similar effort gaining momentum in Ireland. NASF is also seeking more rigorous regulation of fish farms throughout the North Atlantic and demanding full environmental assessments before licences are granted for new operations. In March 2015 NASF signed a cooperative agreement on a 3,000 ton land-based salmon farm near Keflavik International Airport in Iceland. Representatives of the Irish and Scottish governments have been invited to Denmark to review land-based operations of salmon farms. A number of projects are being set up in Florida, Denmark, Germany, France and Iceland.

Restoration of Atlantic salmon runs on the East Machias River in Maine, USA
NASF is dedicated to restoring Atlantic salmon populations to their historic abundance everywhere. Nowhere is the species more threatened than in the US where only a few thousand fish return each year to spawn. NASF is partnering with the Downeast Salmon Federation on a project we hope will demonstrate that hatchery and stocking techniques used successfully to restore the salmon run on England’s River Tyne will work on the East Machias and other Maine rivers. Early indications are quite positive.

England program
An initiative has started this summer to  try buy out the remaining salmon nets is estuaries off the coast of South England. The project will be lead by the South West Rivers Association with the Migratory Salmon Foundation (MSF) acting as the buyer. A number of netsmen throughout the coast of the UK are in talks with NASF discussing the issues. In September NASF met with the UK Minister of Environment in London, Mr. George Eustice, in an effort to speed up the process, in particular the remaining drift nets and T & J nets/traps  off Northumbria and Yorkshire. On November 19th, NASF was invited by the UK Government to a Salmon Summit to seek ways forward for management and regulations for salmon in England. Not so long ago we were the principal financial partners in buying out the remaining nets in the river Exe and the Hampshire Avon. We always partner local groups and usually our participation is through the Migratory Salmon Foundation (Chairman Orri Vigfusson), UK Charity No. 1068311. In any event the meeting went very well and in the next three months we hope to see long term proposals emerging.